By Mark Jones | 5th July 2018 | MarketingTech https://www.marketingtechnews.net/
Categories: Data-driven marketing, E-Commerce, Email marketing,
Mark manages all aspects of editorial on MarketingTech as Editor, including reporting on the fast-paced world of digital marketing and curating the site’s network of expert industry contributions. Originally from Plymouth, Mark studied in Reading and London, eventually earning his Master's in Digital Journalism, and most previously covered goings-on in the idiosyncratic world of performance marketing for PerformanceIN.

Analysing the performance of over 23 billion emails over the course of 2017, results showed that email has yet to be unseated as digital marketers’ top-performing channel.

At 97.5%, delivery rates remained extremely high – that figure represents just a slight dip year on year – although this does equate to over 500 million emails missing the target.

On the other hand, open rates have seen a 0.5% increase, up to 18.1% this year, while CTRs (click-through rates) remained at a steady 1.9%. Over half of consumers (56%) said they would likely click a link in an interesting email so that uptick suggests marketers have remained consistent in email relevancy.

While B2C emails are more likely to be opened by their recipients, B2B emails (3.2%) racked up 52% more clicks than their consumer-facing counterparts (2.1%), representing a reversal of last year’s findings.

“There is an onus on B2B senders to ensure that the products and services being promoted are aligned with the recipients’ organisation and their role,” commented Guy Hansen, senior director of professional services at Return Path; “which implicitly means greater relevance.”

Drilling down by sector, finance companies saw the highest open rates (25%), followed by not-for-profits (21.8%), and while some of the last opened were those relating to utilities (14.9%), these emails garnered the highest CTR.

“Financial emails are most likely to be bank statements or pre-statement advice, which will be important for a recipient to open,” explained Jenna Tiffany, founder and strategy director at Let’sTalk Strategy.

“The same for utilities email, but in a more actionable way – these type of account-based update emails will drive action from the recipient, whether that’s to login into their account and see their monthly statement or summary or for them to take action in their account,” she explained. 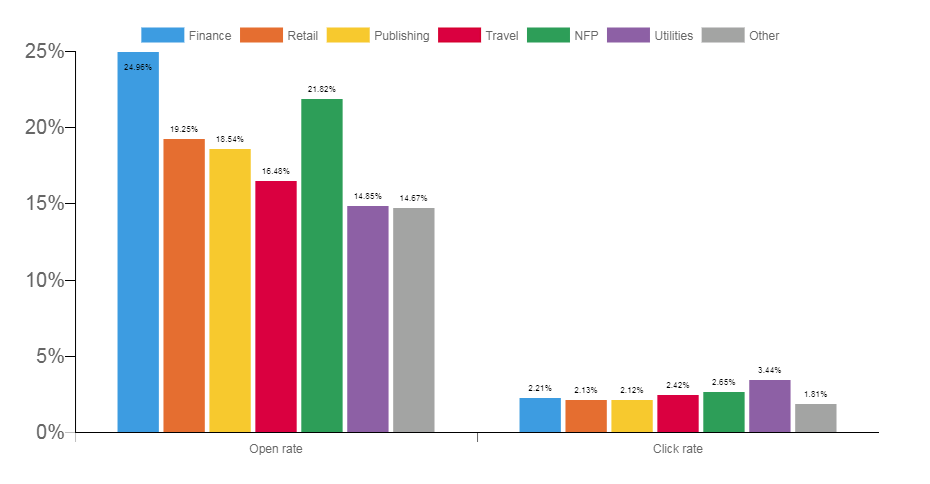 Observing the findings, strategy & insight director for the research sponsor Dotmailer, Skip Fidura summed up the findings as showing that “clicks are still driven by relevance, but opens are driven by interest”.

“The top three sectors for opens – finance, NFP and retail – are no surprise as consumers are naturally engaged with these types of companies, but the top three for clicks (utilities, NFP and travel) deliver more relevant content, which then generates more clicks,” he added.

Fidura also noted that these results are yet to demonstrate the effects of GDPR’s (General Data Protection Regulation) roll out.

“While list sizes may decrease, we should see each of these lists become more engaged in the short term. It is down to marketers to up their game and deliver more relevant content to keep this engagement up in the long term.