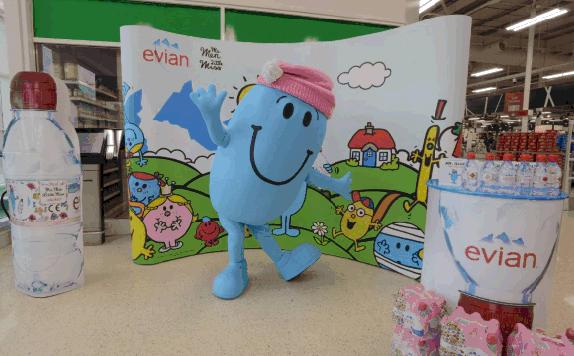 By James Bourne | 18th September 2014 | TechForge Media http://www.cloudcomputing-news.net/
James is editor in chief of TechForge Media, with a passion for how technologies influence business and several Mobile World Congress events under his belt. James has interviewed a variety of leading figures in his career, from former Mafia boss Michael Franzese, to Steve Wozniak, and Jean Michel Jarre. James can be found tweeting at @James_T_Bourne.

“Mr Glug is a very active fellow indeed,” begins the copy. “His favourite sports include water skiing and roller blading.

“All that exercise makes him very thirsty and the thirstier he gets, the more the colour drains out of him,” it continues. “When this happens, Mr Glug must drink water so that his colour comes back!”

Not surprisingly, the campaign is aimed at a young demographic, encouraging children to drink more healthily. The campaign comes with a sticker book of various Mr Men and Little Miss characters, including Mr Happy, Mr Bump and Little Miss Chatterbox, with stickers being made available buying multipacks of Evian.

There is also an online hub, which allows children – of all ages – to play various games, as well as create their very own Mr Man character.

“This is the first time Evian has worked with Mr Men Little Miss and we have loved every minute of it,” said Melissa Loan, shopper marketing manager for Danone Waters. “The Evian kids multipack is a brilliant way for parents to give their children a fun way to drink water whether at home or on the go.”

The campaign will also involve Mr Glug making a series of appearance at Tesco outlets around London and the south east of England. He will visit Cheshunt and Brooklands on September 20 and 21, and Colney Hatch and Southall Hayes Bulls Bridge on September 27 and 28.

You can find out more about the campaign here. Meanwhile, MarketingTech is going to relive its childhood with some classic, Arthur Lowe-narrated Mr Men: