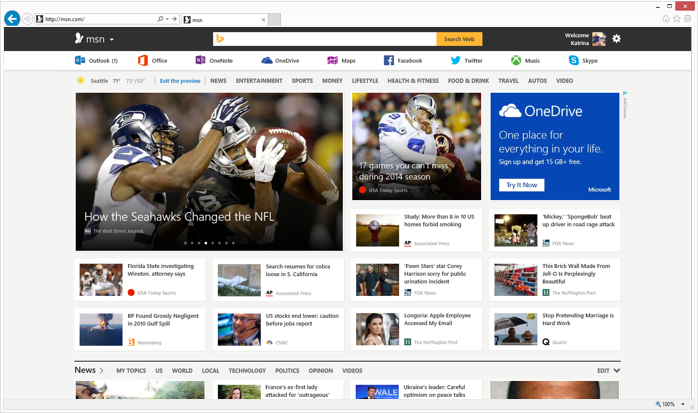 By James Bourne | 8th September 2014 | TechForge Media http://www.cloudcomputing-news.net/
James is editor in chief of TechForge Media, with a passion for how technologies influence business and several Mobile World Congress events under his belt. James has interviewed a variety of leading figures in his career, from former Mafia boss Michael Franzese, to Steve Wozniak, and Jean Michel Jarre. James can be found tweeting at @James_T_Bourne.

Microsoft has announced it is to rebrand MSN, bringing the service forward as a new site featuring Bing apps such as News, Sports and Travel.

The new MSN moves into preview mode today – or it should do, as at the time of writing you get a nasty parsing error – with a glut of new features, including the dubiously named ‘services stripe’, linking back to Office, Outlook and OneDrive.

Looking at screenshots of the new MSN (top) compared with the current version (bottom), there doesn’t seem to be a huge amount of surface change. The new design is of course cleaner, and relates more to current publishing design trends, but it’s underneath the surface which is more impressive: you can pick and choose which widgets you’d like to see on MSN.com.

As a result Microsoft insists this change has been made with its feted mobile first, cloud first vision in mind, adding that new MSN apps will be released on iOS and Android.

“One of our goals was to make it simple to personalise what you want to see regardless of which device you use,” wrote Brian McDonald, Microsoft corporate VP information and content experiences in a blog post.

In terms of news services, Microsoft has buddied with a variety of publishers: The New York Times, CNN and The Guardian among others are signed up.

“The new MSN brings together the world’s best media sources along with data and services to enable users to do more in news, sports, money, travel, food and drink, health and fitness, and more,” added McDonald. “It focuses on the primary digital daily habits in people’s lives and helps them complete tasks across all of their devices.”

The launch comes days after Getty Images sued Microsoft for its Bing Images Widget, launched last month, which enables website owners to embed a series of images which come up through Bing searches. Getty argues that most of these images are copyright which Bing doesn’t have.

Given Microsoft’s recent history of preferring Windows Live, and more recently Bing and Skype to MSN, it’s interesting to note how the MSN.com site – something of a forgotten child – has been revamped.

With Skype getting a lot of criticism over the past month for its forced, unannounced upgrading, one wonders whether Microsoft could be tempted to bring back MSN Messenger, which will shut for good on October 31 as China’s service gets switched off.

Perhaps that’s asking too much.