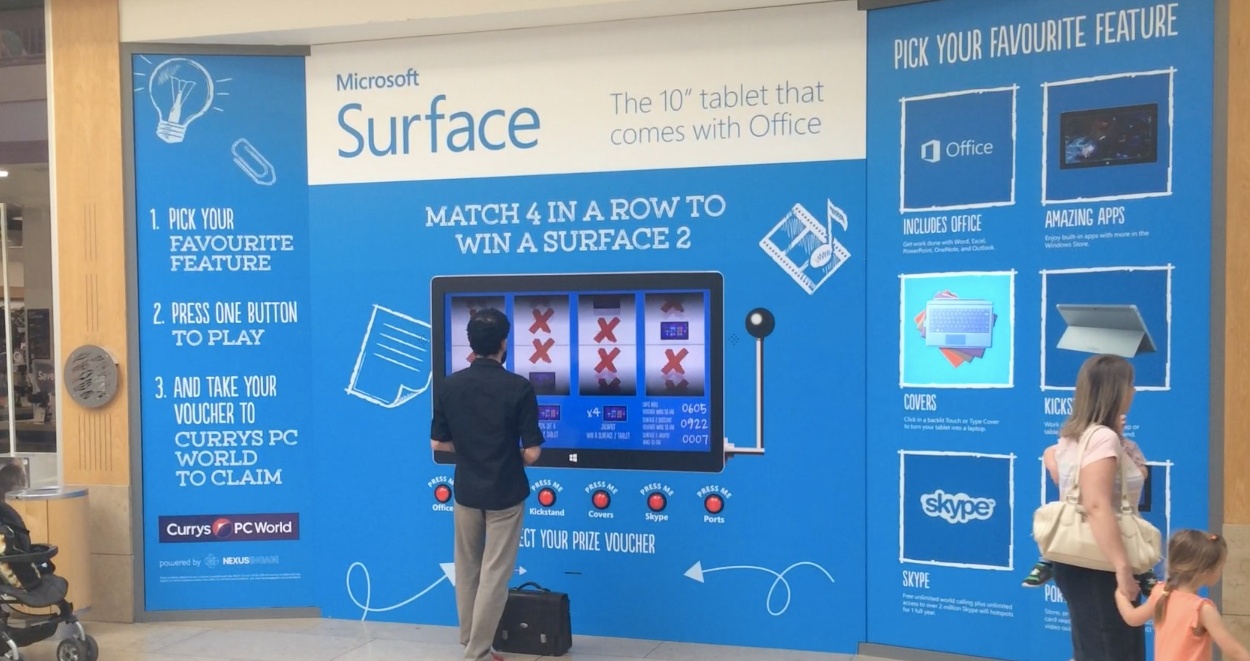 By James Bourne | 15th August 2014 | TechForge Media http://www.cloudcomputing-news.net/
James is editor in chief of TechForge Media, with a passion for how technologies influence business and several Mobile World Congress events under his belt. James has interviewed a variety of leading figures in his career, from former Mafia boss Michael Franzese, to Steve Wozniak, and Jean Michel Jarre. James can be found tweeting at @James_T_Bourne.

Shopping just got a little bit more fun. Patrons who visit the Bluewater shopping centre in Kent are being given the opportunity to win a Microsoft Surface 2 tablet by chancing their arm on a one-armed bandit – with overwhelming engagement levels the result.

The promotion, for Curry’s PC World, was put together by retail marketing bods NexusEngage, and offered passing customers a gamble based on the feature they liked most about the Microsoft slab. Match four in a row on the fruit machine, and they won a Surface 2. Non-jackpot prizes included 20% off a Surface 2, or a cup of coffee.

According to NexusEngage’s numbers, more than 90% of customers who walk past the giant screen engage with it, with over 30,000 (31,662) hits in its first week.

“We are seeing some great consumer engagement coming through from the retail window for Surface 2,” said Ally Wickham, Microsoft consumer Surface category lead. “By creating an experience where shoppers can enjoy themselves and engage with Microsoft, it is a great way for people to interact with the Surface 2, especially when consumers are already in the buying frame of mind.”

NexusEngage CEO Simon Ellson concurs. “Taking advantage of redundant retail space and repurposing it to create a new consumer experience, such as a fun game, can make a brand stand out from its competitors on the high street,” he said.

“Not only does it enhance the consumer’s shopping experience, it targets potential new sales at a fraction of the cost typical to other traditional advertising and marketing tools.”

The promotion continues until August 22, if you fancy chancing your arm. Take a look at the screen below: