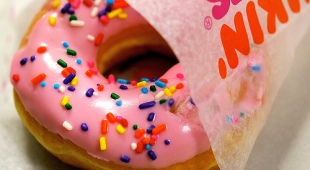 By James Bourne | 10th September 2013 | TechForge Media http://www.cloudcomputing-news.net/
James is editor in chief of TechForge Media, with a passion for how technologies influence business and several Mobile World Congress events under his belt. James has interviewed a variety of leading figures in his career, from former Mafia boss Michael Franzese, to Steve Wozniak, and Jean Michel Jarre. James can be found tweeting at @James_T_Bourne.

It can only take a moment to make a first impression – so in theory for some advertising spots, the snappier the better.

Step forward Dunkin’ Donuts and Trident Gum. The two companies have both in the past day debuted adverts made entirely from Vine, the six second Twitter video tool.

The two companies patently had different methods of achieving this goal. Dunkin’ Donuts went for the stopmotion route, whilst Trident enlisted the help of Vine superusers Nicholas Megalis and Rudy Mancuso.

Yet it’s the placement which is most interesting. Dunkin’ Donuts’ advert played on ESPN’s five second billboard slot, becoming far more interactive and interesting than the standard corporate logo which takes up the sports channel’s billboard space.

As a result, the confectionary provider had to shave a whole second, or one sixth of its video, off to fit in with the billboard timing requirements.

The question from here, though, is whether six seconds will become the norm for advertising in the future. Considering with Netflix’s influx of original programming, the idea of the 30 or 60 minute TV programme slot is a thing of the past; it could be the same for TV advertising as we know it.

Take a look at the two Vines below from Dunkin’ Donuts and Trident Gum. Which one do you prefer? And will this become more commonplace one year from now?