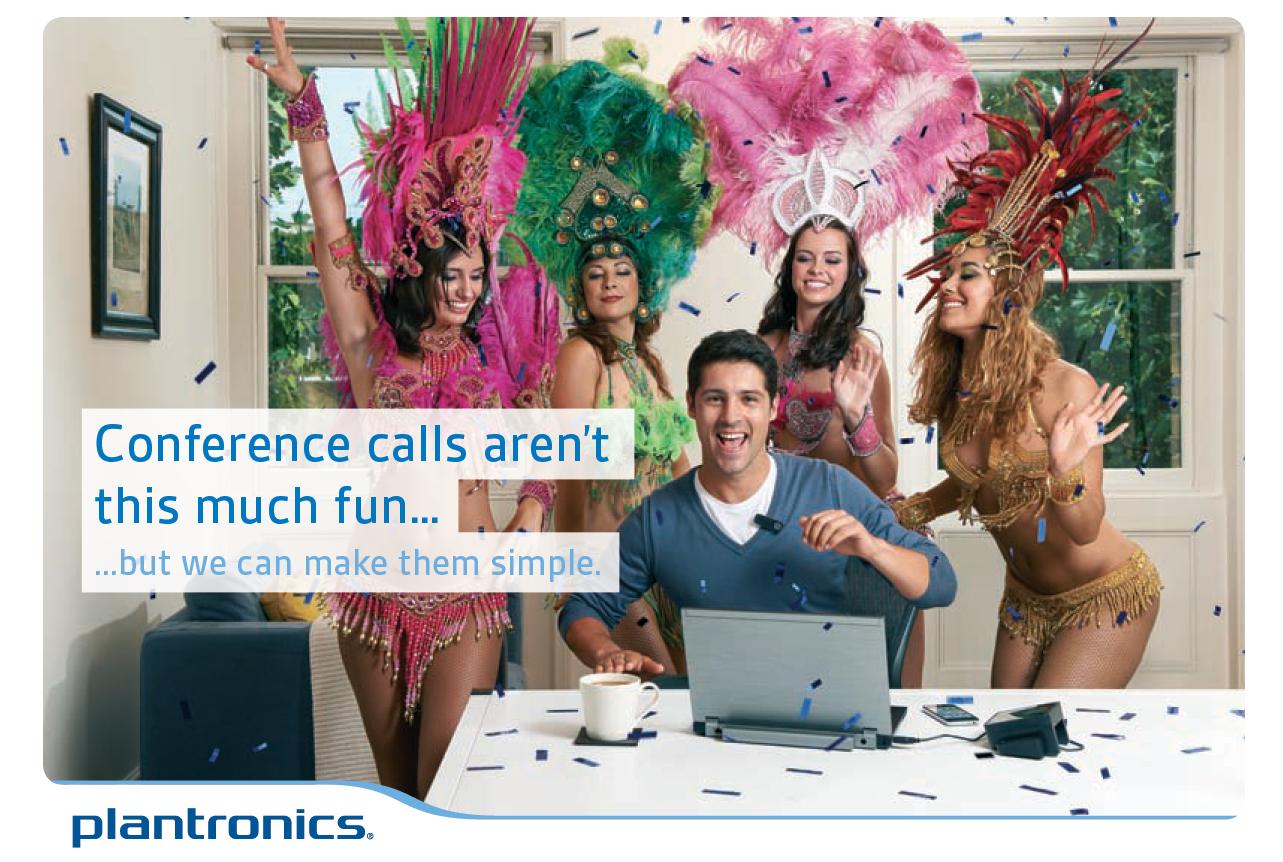 By Matt Henkes | 24th October 2011 | Tech Portfolio http://www.cloudcomputing-news.net/
Covering tech trends across a number of key sectors, including telecoms, apps, marketing and IT, Matt is Editor in Chief of Tech Portfolio. Contact him via twitter @MattHenkes

Ever found yourself wracking your brains over a fresh new angle with which to promote something? How do you take a dry B2B product and spin it into an innovative brand message that not only communicates the product benefits, but grabs attention and sticks in the mind?

When the award-winning full-service agency Direction Group was approached by Plantronics, the communication technology specialist, it was exactly the quandary they found themselves facing; how do you make voice conferencing technology sexy and exciting?

Having now unveiled their eye-catching new campaign, we caught up with them to get the low-down on how they approached the project brief and what the thinking was behind their creative decisions.

“Plantronics were looking to supplement their existing marketing plan with a more focused campaign, due in part to the introduction of several key new products in their B2B range,” says Patricia Harriss, business development director at Direction Group.

“As such, the campaign had to to simultaneously achieve the goal of creating noise and awareness around the new products, whilst promoting the overall headset category to engage users who had shown little or no awareness or interest in adopting the products.

“It was agreed that we would deliver a more targeted approach for the campaign and focus on one particular application, conferencing calling,” she adds. “This strategy would highlight the Plantronics products and how they can make conference calling better.”

The client had specifically requested that the campaign communicate with the target audience on a one-to-one basis, targeting users who regularly use conference technology; simply and effectively delivering the message that Plantronics was releasing a range of products and solutions that could make their life easier.

“We know conference calling isn’t this much fun, but…”

Key to the success of the project was ensuring that the language and tone of the campaign could be easily translated across cultural and language barriers, spanning Europe, the Middle East and Africa. Harriss and her team focussed their creative thoughts on three simple, primary benefits of the technology; “Simple, better and easy”.

This approach resulted in a conceptual angle that took a wry approach, capturing the users’ attention, while at the same time providing a witty yet grounded view of the brand’s ability to “make conference calling better”.

“Our design direction looked to take conference calling into a hyper-real situation through an overstated placement of the brand’s benefits,” says Harriss. “This claim was quickly well-qualified with a realistic viewpoint on what problems are solved, and swiftly moved to place a focus on the reality of how each Plantronics product can provide a tangible benefit to the individual.”

The team knew they needed to reach a tech-savvy, time poor, B2B audience. The marketing activity had to be directed at places where they would traditionally be; “channels that Plantronics end users experience on a regular basis”.

“We kept to the fairly traditional; DM, EDM , web banners and advert templates for end user and channel press as these are still the best ways to reach our audience,” says Harriss. “As this creative will be used on a long term basis, we anticipate that we will adopt new channels such as video and social media as the campaign progresses.”

Satisfied client Richard Robbins, head of demand generation programmes at Plantronics says, “DirectionGroup have done a great job in devising a wry and attention grabbing campaign that will bring our proposition to life, and importantly communicates that Plantronics solutions ‘make conference calling better.”

Key to the project’s success, says Harriss, was the creative team’s ability to approach the subject with humour, enabling them to create a positive engagement with their target audience. “When marketers are faced with engaging purchasers, it’s essential to think outside the box and often consider going in the opposite direction to the tone of the product,” she says.

“Using humour and irony isn’t always the best route to take, but in certain circumstances it can bring life to an ordinary subject.”